Himalayan Travels - Part II - Why you as a parent should take your child to Himalayas?

Kedarnath - the lord of the summit


17th May (Friday): I woke up to a cold and blustery morning and overheard animated conversation between the priest (pandaji) and the housekeeping staff. It slowly dawned on us that at 12,000 ft above MSL, life is quite different. Water is freezing and is not your best friend. The quality of hot water changes ever so quickly. Most importantly, mind is willing but the body is not.

We pushed ourselves out of the room and walked over the snow which had fallen in heaps and crusted. I got the first view of the Kedarnath temple and lo behold it was simply majestic!! Imagine the temple with snow peaks at the back and a simply breathtaking landscape overall.  Is this the gateway to heaven or heaven itself ? Is this the dividend for the 'power of faith'?

What is it that a 5th grader can do faster than us grown ups ?
Here is the best kept secret of the trek. A 5th grader was the first to scale the summit ahead of the pack!!. Though I did not get to witness this scene, I was told that he just breezed through. When I chatted with him, his reaction without any hesitation was that he could not have done it if his parents were around since he believed that he would not have enjoyed the unfettered freedom that he did with this group!! Wow that is maturity beyond years. This set me thinking if we parents were 'excessively protective' of our children. I hope and wish many more successful treks to him!!!

Kedarnath – Climbdown
"A Himalayan trek is a metaphor for life itself....." said a famous mountaineer.  The summit is to be reached and you cannot stay there. You have to descend and move on..

The climbdown was largely uneventful and listless. The panoramic views are the same. The valleys, the rivulets, grazing sheep are all the same. The body was numb and the mind is occupied with a myriad thoughts. The more I thought about it, the experience began to sink in.

18th May (Saturday): Rudraprayag Sightseeing.
We drove down to see the Koteshwar Mahadev temple. Before we get there, here is some background to Rudraprayag. The legend about Rudraprayag is that Narada Muni performed penance for many years here. Lord Shiva is supposed to have taught music to Narada. The instrument that is associated with Narada Muni is incorrectly understood as Tamboori. It is actually the Rudra Veena. Please follow this link for a  recital of Ustad Asad Ali Khan playing Raga Asavari on Rudra Veena .

The speciality here are the numerous naturally formed Shivlingas in a cave. Truly the spectacle is the Shivlingas getting a continuous supply of Ganga water. The natural way!!! 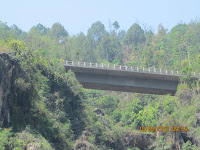 Just in case, if you needed reiteration that Man is simply dwarfed by some simple things of nature. Everything in the universe has its exact place and Man with his quest for knowledge, may decipher the laws of nature but can he succeed in his endeavor of conquering nature. The picture on the left triggered a series of questions in my mind. The bridge which is a man-made structure of possibly 30 ft length, how hard was that to build?

While we were exploring the bathing area at Rudraprayag we ran into a statue. I discovered that it was in front of the ashram being built in memory of Swami Haridas Giri. My father-in-law was a great devotee of Swamiji and used to be one of the committed disciples. In the early 90s my father-in-law would attend the bhajans which would be held as early as 5am in Chennai. This was a unusual and yet emotional serendipity. 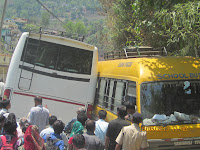 Driving is not for the faint hearted in the Himalayas. We had a hair-raising experience on our drive back to the hotel. Our buses were the centre of attraction for close to 20 minutes. The entire town congregated at this stretch of road while our driver was negotiating the oncoming School Bus on the right and the head-spinning valley to our left.We all survived without a scratch but the bus suffered a few scratches and a deep dent!!! 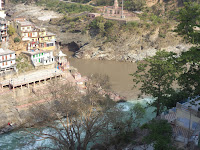 After touching the lesser known Srinagar (of Garhwal) we meandered into Deoprayag. Our driver chose a vantage point from which we could get a beautiful view of the Sangam (union of Alakananda and Baghirathi rivers). This spot marks the formation of river Ganga. 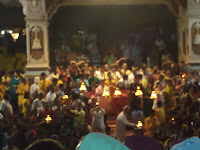 In addition to being such a big draw for river rafting and camping on the banks of Ganges, Rishikesh is also the Yoga capital of the world. There appears to be a wide variety of choices of ashrams, Yoga gurus and the branch of Yoga that you may like to study. (It reminded me of Namma Bengaluru as the IT capital has posters which scream "Learn Java in 7 days"). There are numerous courses on offer of differing duration.

We were keyed up to watch the Ganga Aarati as the Sun sets. We scrambled our way into Paramarth  ashram and found vantage positions to witness the Aarati. After a elaborate speech we got to watch the Aarati which is quite a lovely and invigorating sight.

Why should James Bond aficionados instantly recognise the Phat-phati ride?

The stay in Rishikesh was not only about yoga & meditation. We had our quota of thrills in the phat-phati ride. Here is a video of a god-fearing and dutiful phat-phati driver. It is hard to believe the limits of daredevilry one can indulge in if you driving one of these innocuous looking 3-wheeled automobiles.


We boarded the phat-phati after the Aarati to get to the Swami Rama Sadakgram.  This driver was a pan chewing teenager and my guess is that he was in his early 20s. Me and Srinivas sat next to the driver and were closest to the seat of action. It also lent itself to the best view as the action was to unveil. We had about eight ladies of our group at the back (that included my wife and sister!!). This driver either thought the brakes didnot exist or even if it existed, it wouldnot work!!. He only knew how to accelerate and forgot how to brake. We saw a marriage procession occupying the entire road at a distance of about 0.5 KM. He drove thick and fast into the crowd and after terrorising the entire marriage party with high decibel horn and waded through women and children and emerged victorious. He had all the makings of a Bollywood stuntmaster!!  I repeatedly asked him to drive slow and he was visibly upset which only led to a ugly fight with me.


I was reminded of  the James Bond movie Octopussy. This has a sequence where Vijay Amritraj (who plays James Bond's friend) in a Phat Phati (Tuk Tuk in the movie) is chased in another Autorickshaw by Kabir Bedi. It has some terrific chase sequences shot in Udaipur.  Here is the link to the Youtube video of the  chase between Phat  Phatis. 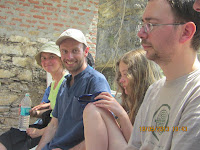 Kasper Frausing whom I now consider as Indian or more Indian than most of us here was with us along with his sister, brother-in-law, niece and brother-in-law's brother. Their enthusiasm throught was infectious (pun unintended!!) notwithstanding the minor inconveniences that they endured. Their propensity to fall sick also had a sequential pattern. I guess the stomach virus caught up with Kasper on the way back which he dealt with manfully and with a smile!!
Way to go my friend Kasper and look forward to seeing you soon.

I am both delighted and tad disappointed after this trek. Delighted that I discovered a part of India which always existed for others and not ME. Disappointed, yes - because it took me an eternity to discover it.

Now I crave for more. I am yearning for my next trek in the Himalayas.